after spying a classic walnut, blue cheese & pear salad on robyn maclarty’s blog koek, i immediately thought of my favourite salad of the authentic greek kind. i’m not talking the watered down version you get at mugg & bean and numerous other cafes across the country – greek salad does not have lettuce in it. 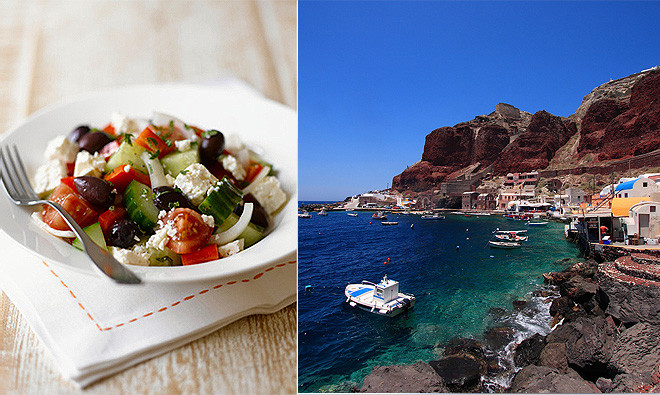 my own version differs from the original greek salad in that i don’t peel the cucumber and i cut the feta into smaller blocks. i also don’t include green peppers, which is only optional for a greek salad as far as i know. you can also add capers, but i find them to be way too salty. you’ll need:

and from here it’s simple – just cube all the ingredients, slice the onions, toss together (de-pip the olives to prevent broken teeth) and dress with generous amounts of olive oil and just enough vinegar to taste – a tablespoon usually does it. also lots & lots of the dried herbs. the dressing really makes the salad. you can leave it to stand for a good while before serving, it just tastes better & better. though obviously, like all salads, does not taste great as leftovers.

it’s insanely good with greek lamb and mezze, but i eat it on its own all the time. i once ate only greek salad for a solid week… a combination of sheer deliciousness and laziness.

ps: i was politely nudged by robyn to do some more food posts ;) i am not a foodie by any means, but i am going to convince my friend jessica to feature some recipes soon.

A Self-Drive Safari through Lake Manyara, Ngorongoro & The Serengeti