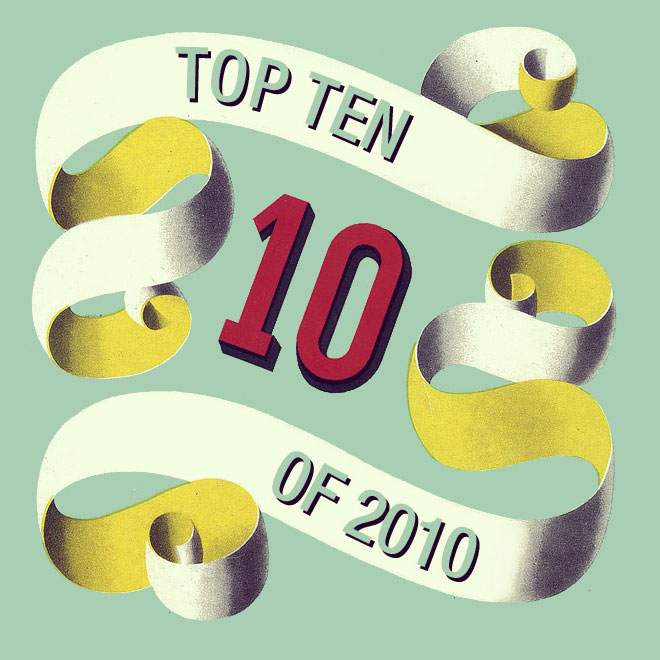 i was pretty damn thrilled when i received a mail from steph who hosts a radio show at american university in washington dc. she kindly asked me to contribute a playlist to their programme (called “muzak to make your booty clap” – hehe) and my first thought was, “YES! an actual real life legitimate reason to make yet another music mix.”

the theme (there’s always a theme) is a track from each of my top 10 albums of 2010. the criteria for my favourite albums are easy: i picked the ones i listened to all the way through, on repeat, all year long. in no particular order.

bear in mind that i’m not a music critic and i’ve simply chosen albums from artists i love, not based on any metacritic ratings or what pitchfork thinks. so there.

arcade fire – sprawl II (mountains beyond mountains) from the suburbs
my absolute favourite album of 2010, along with thousands of others i’m sure. i have wanted to include this song in a playlist for the longest time, but it never felt right – as if it would simply overpower the rest.

the morning benders – wet cement from big echo
they caught me hook line and sinker with opening track excuses which makes for absolutely addictive listening, the rest of the album is of course excellent – surprising in parts and never predictable.

sharon jones & the dap-kings – better things from i learned the hard way
i want to high five sharon jones, she is just all kinds of awesome. i enjoy singing along to this one.

she & him – don’t look back from volume two
i actually killed this album within a week and had to give it a break for a few months – guess there is such a thing as too much zooey deschanel. woops. it’s still in my top ten though.

best coast – crazy for you from crazy for you
makes me happy and sad over and over. “want to kill you, but then i’d miss you.” honest lyrics and the feeling of california sunshine is highly appreciated.

matt & kim – AM/FM sound from sidewalks
the newest release on the list, but i’ve listened to it enough times to already consider it a favourite. love the lyrics in cameras, “no time for cameras, we’ll use our eyes instead” – right on.

the black keys – tighten up from brothers
the kind of band i wish i could see live in a dark bar with an audience of less then fifty people, sitting arms length away from the stage. if i drank bourbon & smoked cigarettes that’s exactly what i’d be doing while listening to them.

mumford & sons – roll away your stone from sigh no more
this album wasn’t on the list originally because it was released late 2009 in the UK (early 2010 in the US.) but then i thought – fuck it. i’ve listened to it so much this year it’s actually ridiculous and would be a travesty if i didn’t include them. you need only watch this video to understand why these guys make me swoon so much.

broken bells – the mall & misery from broken bells
total goosebumps the first time i heard this song, it has such a great build up and then suddenly james mercer sings and it’s all over for you. i instantly fell in love the first time i listened to them.

kings of convenience – declaration of dependence
another album released late in 2009, but that took me through 2010.

janelle monae – the archandroid
i must admit i don’t love it completely, but i love parts of it enough for it to almost be in my top ten

the tallest man on earth – the wild hunt
i love a good folk artist, and kristian matsson is a great one.

vampire weekend – contra
released so early in 2010 that i almost forgot about it.

wait what – the notorious xx
does not technically count because it’s a mash up album (what about girl talk though, right?) but this too was on repeat for a good chunk of 2010.

ps: album art is a pretty unsophisticated mashup of this & this.

there’s something about us

This Is My Jam

Ships In The Night