Maria (also known as Miss Crowland) is the lady behind Big Tinsel, another of my inaugural sponsors. I’m excited for you to get to know her better through one of my favourite series – things i like right now. Maria is offering a 10% discount until the end of November if you use the coupon code MISSMOSS over at her shop when you checkout! 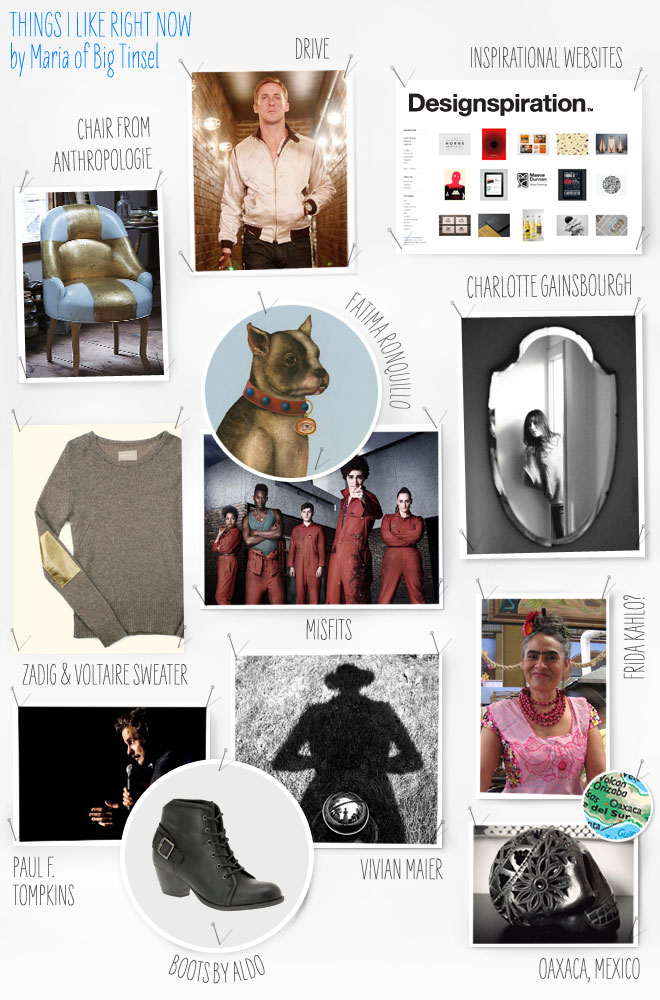 Drive. I know I’m a little late to the game, but I just recently saw Drive, and it blew me away. I love it when movies cross genres and take a leap stylistically, and in this case, I think the results were fantastic. The saturated colours and lights — the dreamy music and sound design — it really evoked the idea of a modern and warped fairy tale…and the neon pink scripty font on the main titles is the perfect 80’s throwback.

This chair from Anthropologie. If I had the money and the amazing house to put it in, it would be mine. Both medieval and modern (medievern? modieval?)

Designspiration + Very Very Beautiful. A great way to get the creative juices flowing.

Fatima Ronquillo. Surreal, dreamlike portrait painter Fatima Ronquillo seems to create a world that existed long ago in some alternate universe. I particularly love the animal ‘portraits’. I draw pet portraits myself (at misscrowland.etsy.com), and there is definitely something magical about drawing animals. They seem to have such amazing sprits that always show through.

Charlotte Gainsbourgh. The first movie I saw her in was the french film Lemming, which is this weird thriller about these two couples and a major lemming infestation. She wore a pair of Wrangler jeans in that movie that I wanted so badly. She just has the best personal style. I love that she always looks a little messy and effortless, even when she dresses up. I’m looking forward to her new album coming out this month. (Photo credit)

This sweater by Zadig & Voltaire. What better way to elevate a simple cashmere sweater than gold elbow patches, I ask you?

Misfits. I watched the first two seasons of this British show about juvenile delinquents turned superheroes online over the course of a weekend. One of the most fun and visually arresting shows I’ve seen in a while, and the third season just started up in the UK!

Paul F. Tompkins, I’m a gigantic comedy nerd, and right now Paul F. Tompkins might just be my favourite comedian. He is particularly popular in the podcasting universe, making appearances on just about every comedy podcast in existence, as well as host of his own, the Pod F. Tompkast. He has more of a storytelling style to his act, and does several terrific impersonations, my favourite of which might be Gary Marshall. Go to YouTube and listen to Cake vs. Pie… I dare you not to laugh.

Vivian Maier. One could say she is one of the greatest American undiscovered photographers. Her work was discovered in a storage locker, later to be owned by Chicago historian John Maloof. She was a nanny who photographed street life for over 40 years, and never shared her photos with anyone until their eventual discovery. It’s a remarkable story made even better by her incredible photos.

These boots by Aldo. I have too many boots already, but I couldn’t resist getting these. They are the perfect blend of badass and practical…because I think both of those things are equally important.

Oaxaca, Mexico. A good friend of mine is currently living in Oaxaca, and I just came back from a visit in September. Oaxaca might just be the mecca of handicrafts, and I had to hold myself back from buying just about everything I saw. Two particular highlights for me (other than the fantastic food) was the market in Ocatlan, which is where you will find a food booth run by a living clone of Frida Kahlo, and the gorgeous black pottery of San Bartolo Coyotepec (of which I came away with a fantastic skull). Some pictures of my trip can be seen on my Flickr page.