man oh man, when Hila sent me this guest post i actually squealed like a little girl. one of my favourite things about her blog is when she talks about films, and quite a few of those are period dramas. we have actually done a couple of comparisons projects that fall into this category, so we are kindred spirits when it comes to our love for a good costume drama. plus who wouldn’t enjoy getting another look at colin firth as darcy?

Hello, I’m Hila from the blog, le projet d’amour. When Diana asked me to contribute a guest post, I wanted to compile a special one to thank her for her own fabulous guest posts on my blog last year. When I asked her to do these posts, I was in the middle of writing my book (and very, very stressed). I recently finished this book and sent it off to my publisher. A few days later, I started getting all sentimental about the process of researching and writing the book. So I thought it would be nice to share one of the loveliest aspects of my research here.

My book is on film and television adaptations of famous literature. Along the way, I’ve delved into the various locations where these period and costume dramas were shot. Here are a few of my favourite locations … 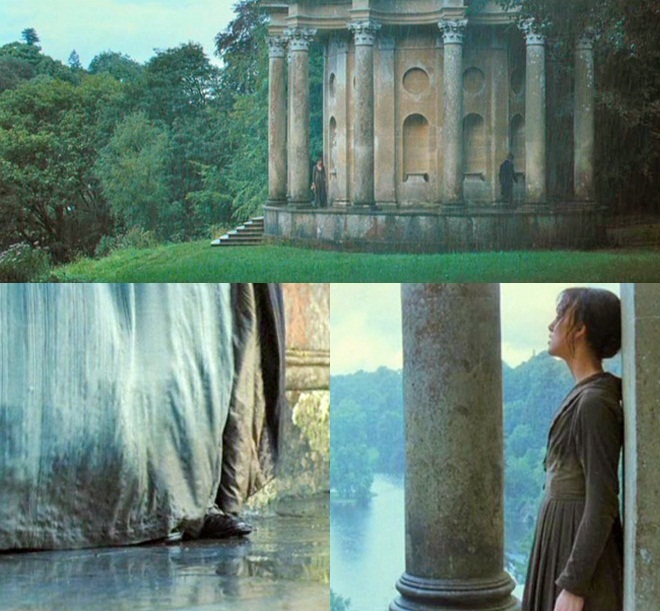 In Joe Wright’s 2005 version of Jane Austen’s Pride and Prejudice, Darcy dramatically proposes to Lizzie in the grand Temple of Apollo in Stourhead Garden. This shooting location seems like a good nod to the Regency period in which Austen’s novels were originally set, because neo-classical buildings such as this one were quite popular during this time. Austen’s society had a bit of a craze for the style, architecture and fashion of ancient Greece and Rome, and many Regency buildings imitated ancient classical temples. 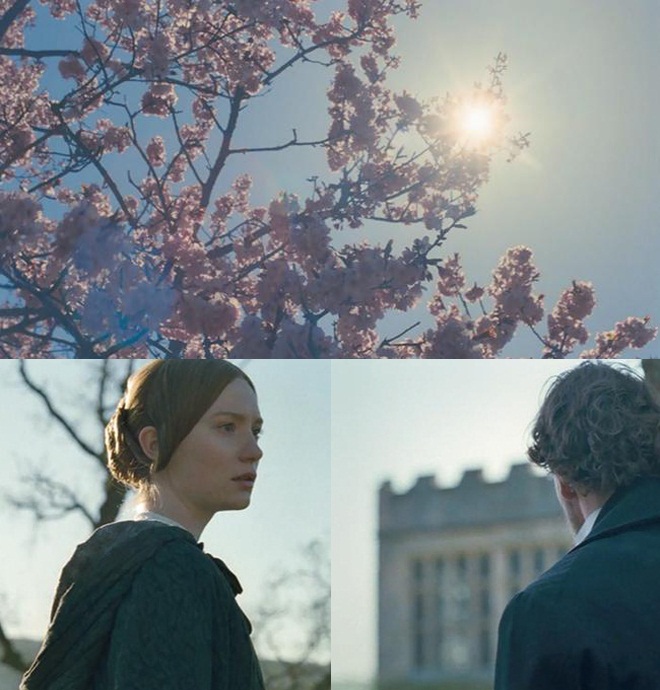 The latest 2011 film adaptation of Charlotte Brontë’s Jane Eyre directed by Cary Fukunaga was partly filmed at Haddon Hall, which served as the setting for Rochester’s family home in the book, Thornfield Hall. There were many, many other period dramas filmed in Haddon Hall, including Elizabeth (1999), Franco Zeffirelli’s Jane Eyre (1996) and the BBC’s 2006 production of Jane Eyre with Ruth Wilson and Toby Stephens. I personally think though that Fukunaga made the best use of the impressive space of Haddon Hall to highlight the original Gothic undertones of Brontë’s novel. 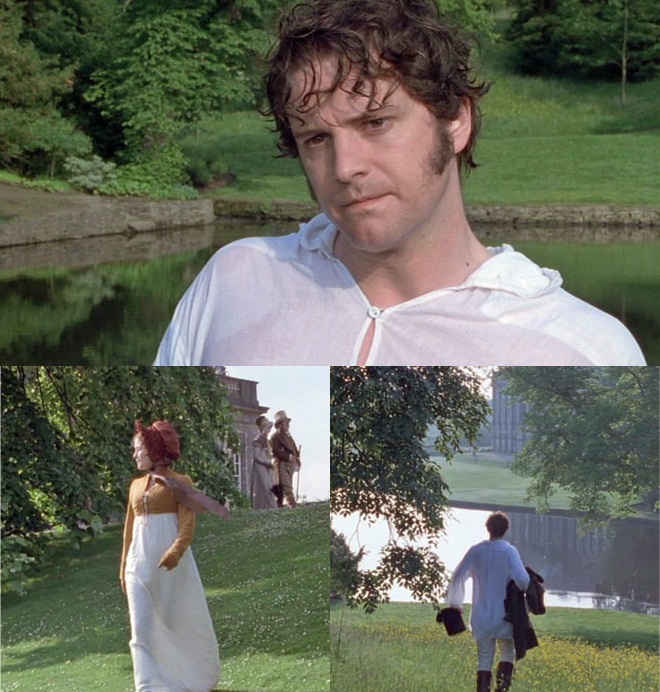 Lyme Park is the famous location for Darcy’s heart-stopping lake swim in the BBC’s 1995 television serial of Pride and Prejudice. I think we can all agree that this lake scene with Colin Firth will go down in history as one of the best moments in period drama. They just don’t make sexy British repression like they used to. 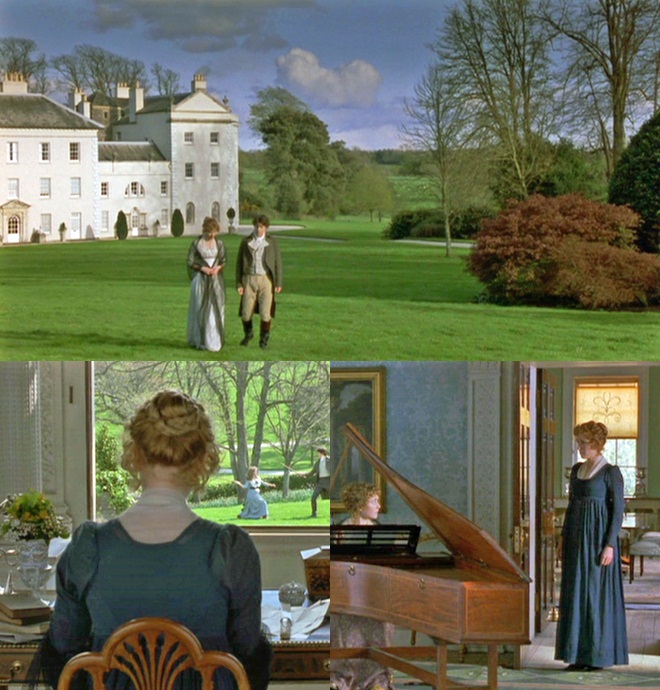 Saltram House is the shooting location for Norland Park in Ang Lee’s version of Sense and Sensibility (1995). This is my favourite adaptation of the novel, and Saltram House seems to encapsulate the Regency’s ‘Era of Elegance’ with its cool white exterior, harmonious architecture and perfectly manicured grounds. And while we’re speaking of Lee’s Sense and Sensibility, you really have to go read these hilarious extracts from Emma Thompson’s personal diaries while shooting the film. You can thank me later. 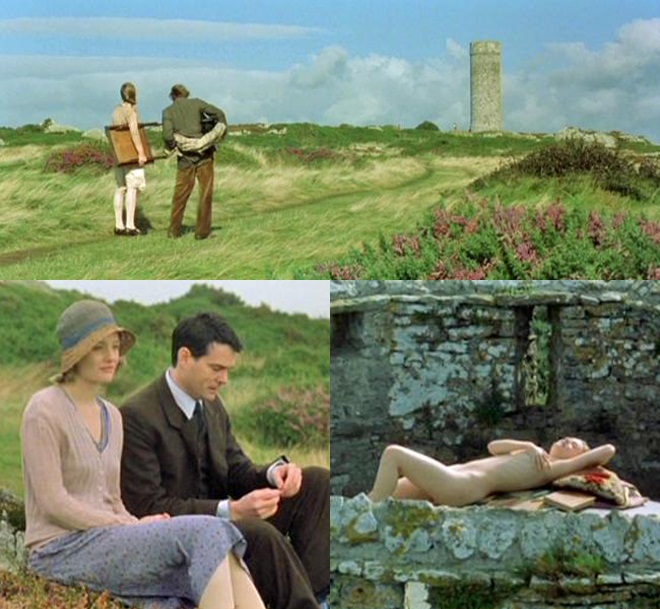 Dodie Smith’s I Capture the Castle was one of my favourite novels when I was growing up. When it was turned into a film in 2001 by Tim Fywell, I was instantly smitten yet again. The eccentric Mortmain family’s castle home is set in Manorbier Castle in Wales, although many of the interior scenes were shot elsewhere. But there is a unique romance to the rugged exterior scenes and crumbling castle. 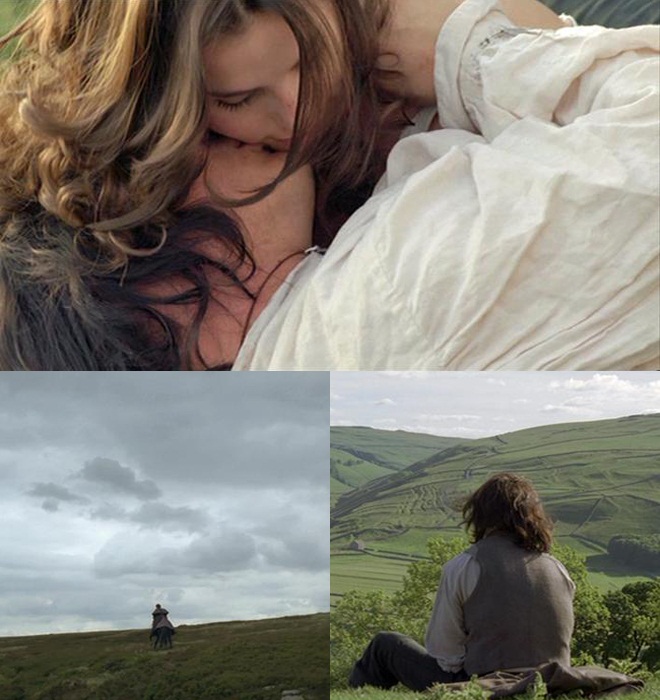 Nearly every single film and television version of Emily Brontë’s classic novel, Wuthering Heights, features sweeping shots of the Yorkshire moors. Although the moors cover vast areas of England, when most people refer to ‘the moors’ they’re usually speaking about the landscape known as ‘Brontë country’ in West Yorkshire, England. I was lucky enough to visit the village where the Brontës lived and wrote for my research, staying in a house that was the former residence of their doctor. It was just lovely (but cold!). 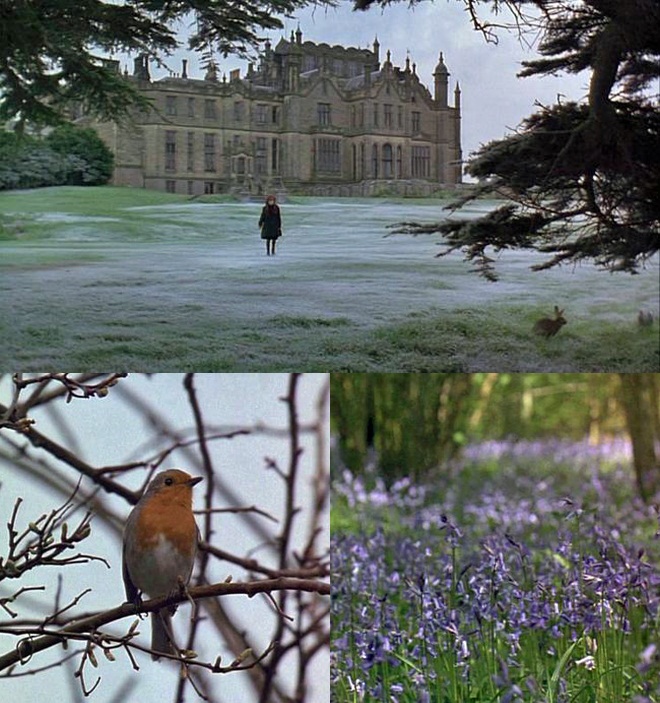 Agnieszka Holland’s beautiful adaptation of The Secret Garden (1993) was filmed on location at Fountains Abbey in North Yorkshire. I remember reading The Secret Garden when I was younger, loving all the small details about plant life and the natural environment. I think Holland’s film homage to the novel is a loving and sumptuous visual interpretation of such passages in the book.

I hope you enjoyed my mini period and costume dramas tour!