Michael standing in front of his mural for Bosjes, in collaboration with Lucie de Moyencourt

if you grew up in and around the Cape you’d probably be more than familiar with the VOC-era East Asian porcelain that is woven into South Africa’s dark colonial history. as a child i would frequently come across little blue and white shards of ceramics hidden in the dirt in my hometown of Stellenbosch. it was always exciting (have i found an actual treasure??). it’s not something i have given much thought to since then, but for Michael Chandler this interesting slice of history (amongst many other things) is a constant source of inspiration.

Michael is an artist, designer, curator & shop owner. his shop Chandler House is possibly one of my favourites in all of Cape Town – showcasing a revolving selection of work and goods by local artists, as well as Michael’s own designs. it was while studying towards his degree in art history that Michael began working at a local fine art auction house, and later as a research assistant to a prominent fine arts & antiques dealer. his love for history and antiques clearly influences his creative endeavours, especially the unique visual history of the Cape…

The Cape has such a rich and unique history of design and interiors that is only starting to be tapped now. The fulcrum between the West and the Rest, Cape Town straddled, juxtaposed and wove all sorts of different pieces into its own unique song. It is this siren song that has Michael designing wallpapers inspired by 18th Century Imari’s Vases, crockery that gives a nod to the pepper trees at Kersefontein and tea cloths printed with Vergelegen’s orchard layout… and he seems to be having fun doing it.

if you follow Michael on Instagram you’d know he’s a keen “sharder” – he has a knack for finding shards of antique ceramics all over town (while walking on Table Mountain, in local vineyards, and even on Cape Town’s busy side streets). they are relics of colonial-era shipping routes, as European traders traveled past the Cape to the East and brought back huge quantities of coveted East Asian hand-painted porcelain. Dutch merchants of the VOC dominated this trade route during the course of the 17th century and some of it landed up here when they colonised the Cape, as well as the many fragments that have been washed up on our coastline due to the numerous shipwrecks on this often dangerous trade route.

“Here’s a fragment of 19th Century, English Willow Pattern. I love the graphic, almost Art-Deco feeling that this part of the border decoration adds to the design. I used to collect exportware along the South Eastern Coast of South Africa as a child – porcelain is forever. I used to make jewellery from the shards I found in the Cape vineyards too.”

“I found a shard that I’ve been dreaming about finding for ages. It was lying upside down on an unearthed pavement on Burg Street. I knew it was 17th or 18th Century Japanese or Chinese exportware based on the light blue background of the fragment. Years of sharding have taught me the different shades of plain-glazed bodies and how to differentiate Asian ceramics from English bits. As I turned it over, wiping the crap and mud off it, I soon recognized the narrow, needle-like elements. They were the tail feathers of a Phoenix from the iconic dish which I’ve referenced often in my work. You can even make out the emerging of a letter from a logo that was the stamp of so much sadness. I have longed to find a fragment of this for so long – yet as I sit here holding it, I can’t help but feel deep sorrow. Traumas last a long time. You can even find them in the mud on Burg Street.” Michael makes his own range of ceramics inspired by this style of porcelain work, and is also often commissioned to do small and large scale projects for private clients. you can see some of them below. follow him on Instagram here as well as on the Chandler House IG account (they regularly sell artwork via Stories – well worth a follow). for international readers: Chandler House do ship internationally (including tiles!) – everything is sourced and fired, hand-made etc. in SA. Michael also paints entire dinner services by hand, often to match a client’s mural, so worth it to enquire if you are interested in any of his pieces.

The Cape Palampore at Bosjes

A giant 6x6m porcelain tiled mural depicting a Cape tree of life, a collaboration between Michael and artist Lucie de Moyencourt for the wine farm Bosjes in Ceres. After a site visit around the farm, in the mud, and finding remains of blue and white ceramic shards on the farm, Michael asked the question: “if these shards where seeds, what would the tree look like?” and so the tree of life concept emerged, with all of the elements of the tree being related to the past, present and future of this specific farm. The tree’s general structure is that of the Indian palampore textiles which came past the Cape in the 18th century. a range of ceramics inspired by a tragic and true story that took place on a Cape farm in the early 18th Century. you can read about the entire story here. “303 years ago Maria Mouton walked down the cobbled path that this photo was taken on, was tethered to a pole, strangled and then burnt for the murder of her husband Frans Jooste. Her lover, Titus of Bengal, who was a slave on the Tulbagh farm would be executed too, along with another slave – Fortuijn of Angola for their part in the murder. According to records they were trying to rescue Maria from an incidence of domestic violence one hot, January afternoon. Bearing in mind the method of torture that was acted out, it seems almost poetic that on this first day of Spring, the very first plate that tells this story was collected from its final kiln firing.”

a private commission for a small chapel attached to a residential house in Noordhoek – featuring a sculpture of Madonna & Child by Olivié Keck. 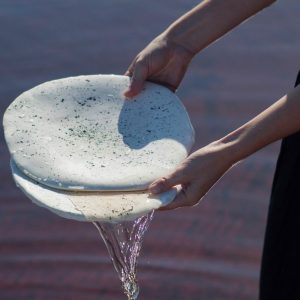 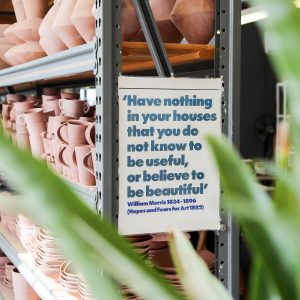